JAKARTA, KOMPAS.com — Pop star Kelly Clarkson’s upcoming concert in Indonesia will no longer be sponsored by a cigarette company, the promoter said Thursday following protests from fans and anti-tobacco groups.

Clarkson, the first winner of “American Idol,” had previously said that while she was surprised to learn that billboards announcing her April 29 concert in Jakarta were prominently branded with the logo of the popular cigarette L.A. Lights, the show would go on with the controversial sponsorship.

“I refuse to cancel on my fans,” she wrote in a posting on her blog. She added that she’s not a smoker and does not advocate it.

Though Clarkson initially indicated that the sponsorship could not be pulled, promoter Adrie Subono said that his company Java Musikindo had reached a “final agreement” with cigarette company Djarum, the maker of L.A. Lights, and the sponsorship had been canceled. He said it would take one or two days to remove all the billboards and pull other advertisements, including those on TV.

“There will be no (L.A. Lights) media promotion at the Kelly Clarkson concert,” Subono told The Associated Press.  Djarum has declined to comment.

In a similar dispute two years ago, Grammy winner Alicia Keys apologized to fans and denounced the sponsorship of her Indonesian concert by an affiliate of U.S. tobacco giant Philip Morris International. She went ahead with the show, but only after the cigarette logo was removed from her promotions.

Indonesia, a nation of 235 million people, is one of the final frontiers where tobacco companies are given virtual free rein when it comes to selling, advertising and promoting their products, practices long banned in the U.S. and many other countries. The Marlboro Man still rides high on huge billboards that cross four-lane highways. Free samples are sometimes given out at events by young women dressed in matching short skirts.

About 63 percent of all men light up and a third of the country’s entire population smokes. A quarter of boys age 13 to 15 are already hooked.

In recent days, Clarkson’s Facebook page has been flooded with fans begging her to reject the cigarette sponsorship, saying she is sending the wrong message to kids about smoking. Anti-tobacco groups have blasted the singer for using her image to sell products that kill 200,000 Indonesians every year. Clarkson fired back in her blog.

“I think the hardest part of situations like this is getting personally attacked for something I was completely unaware of and being used as some kind of political pawn,” she wrote. 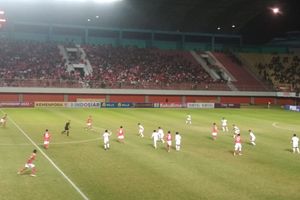